SapphireChild
Here you'll find the exploits of my fanatical hobbies: Orchids, other plants, spinning and knitting.

Clivia cyrtanthiflora, a natural hybrid between miniata and nobilis.  I don't know if this particular plant is a natural hybrid or a man-made "remake," but the effect is largely the same.  A large, beastly plant, it already has 3 pups, one of which bloomed for the first time this year.  Division of this plant would likely require a hacksaw, the root mas is so solid.  Clivias tend to tell you they want a bigger pot by pushing themselves up out of their current pot an inch or so.

Lc Jungle Eyes (Jungle Elf x aclandiae) is a compact cattleya bearing thick, spotted flowers heavily influenced by aclandiae, which makes up 75% of it's ancestry (example flower photo shows C. aclandiae). The rest of Jungle Eye's heritage comes from a miniature yellow laelia species, esalqueana. Both species are small, and Jungle Eyes matures at about 6 inches tall.  This is the first of a batch of seedlings to bloom.  Younger plants of the same cross are available here.

Sophronitis cernua is an awesome little miniature plant, popping buds out of a maturing growth as it finishes out its growth.  Its a creeping plant, easiest to manage on a mount due to its habit of hugging its substrate.  They grow perhaps a little brighter than a Phalaenopsis, otherwise similar requirements, but are highly tolerant of lazy watering habits.

Also, a couple orange bugs - some woolly bears I found hiding under an empty pot outside.  They were grouchy about being disturbed, and vacated shortly after this photo was taken.  These are ground-dwelling caterpillars that eat grasses and weeds, and hibernate during the winter, then spin their cocoons in the spring.  Good luck little fellas. 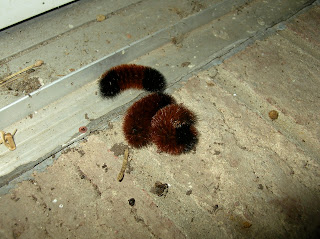 Posted by SapphireChild at 2:53 PM 0 comments